"Every songwriter worth their salt is striving for the kind of balanced poetry andsimplicity that Poe seems to just pour out,” said No Depression of Poe’s most recentfull-length effort 'God & The Girl.' NME describes Poe’s songs as “Storytelling withbeautiful, lush, guitar-underpinned music.” The Village Voice declared him “The majordomo of songwriters.”

Poe has toured the world with Bob Dylan, Joan Baez, Tori Amos, The Jayhawks, and Glenn Tilbrook of Squeeze. A composer fellow of the Sundance Institute, his work features in numerous film, TV, dance and theater projects, official selections of the Sundance Film Festival, and commercials for humanitarian projects like the Malala Fund and the You Mean The World Foundation.

BLAKE MORGAN
“Blake Morgan has a voice that was made to be heard on the radio...inspired songwriting and passionate performances.”
—Billboard Magazine

Blake Morgan's unprecedented five-year run of sold-out concerts at NYC's Rockwood Music Hall has fueled an extraordinary string of headlining performances for the artist around the globe. From 2016 to 2020 Morgan performed over 200 times across 130,000 miles of touring on both sides of the Atlantic, with Morgan selling out concerts across the United States, the United Kingdom, and continental Europe.

Freeman has toured the world and performed with a veritable “who’s who” of pop and rock music: James Blunt, Chris Cornell, Chris Isaac, Joe Cocker, Roger Daltry, Ron Wood, Todd Rundgren, and Steve Winwood just to name a few. He’s played guitar on Blunt’s iconic recording of “You’re Beautiful,” written a 2017 Top-40 Billboard hit for Sleeping with Sirens, and has written songs covered by Robbie Williams, Meat Loaf, and Mark Owen of Take That. His co-writing credits include work with Deana Carter and Carol Bayer Sager.

*The Rendezvous & Jewelbox Theater requires proof of full vaccination (or Negative COVID19 Test within 48 hrs of event) for entrance into the venue. Thank you for helping keep our staff & patrons safe* 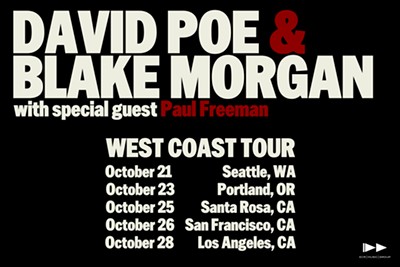