LA based singer-songwriter Pi Jacobs plays what she calls an “Americana bluesy rock thing”.   In 2016 she signed to the Travianana / Mountain Fever Group label based in Virginia’s Blue Ridge Mountains. In 2017 they released her first acoustic album, A Little Blue, to great critical acclaim. She returns to Seattle after a long hiatus, on the release of her latest Travianana / Mountain Fever Group album, "Two Truths and a Lie”, this February.

Award-winning Seattle band Diamondwolf’s second release dropped on September 19th 2019. “Coming Closer”, a 6-song EP, continues the band’s hypnotic, hard-driving folk rock. Alicia Dara and Glen Cooper’s vocals and acoustic guitars recall bands like Civil Wars and The Head and The Heart, with a touch of Band of Horses thrown in.  Their live show has been called “raw and intense” and “folk-punk” by their fans.

Darren Loucas is known in the Northwest as a guitarist and songwriter and has routinely shared the stage with Bill Frisell, The Long Winters, Ian Moore, Wayne Horvitz and more.The Seattle Weekly said, "(Darren's band) Juke’s self-titled debut is one of the more moving to come out of the Northwest in recent years…they could be the one to watch.  And The Stranger says“ his guitar playing is a revelation”! 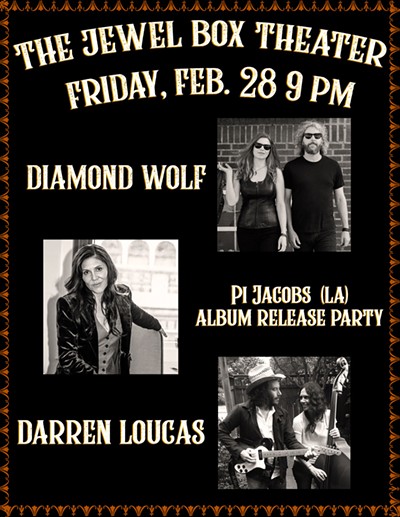